Home > FunPark > 3 New Fantawild Parks Will Be Built in Shaoxing with Total Investment of 4.9 Billion CNY

3 New Fantawild Parks Will Be Built in Shaoxing with Total Investment of 4.9 Billion CNY

On September 29th, Fantawild Holdings Inc and the municipal government of Shaoxing took part in a signing ceremony agreeing to the construction of new theme parks in Shaoxing. Liu Daoqiang, President of Fantawild Holdings Inc. and Ma Weiguang, municipal committee secretary of Shaoxing attended the ceremony along with many other guests. Sheng Yuechun, the mayor and deputy secretary of the municipal committee of Shaoxing, gave the keynote speech.

As detailed in the contract signed, Fantawild and the Shaoxing municipal government will explore the tourism resources of the city and cooperate to embark on a series of projects using Fantawild’s advanced technology. Their plans include three new theme parks: Boonie Bears Land, Boonie Bears Wild Waters, and Shaoxing Cultural Park. The two parties will combine efforts to transform the city into a famous tourist destination at home and overseas. 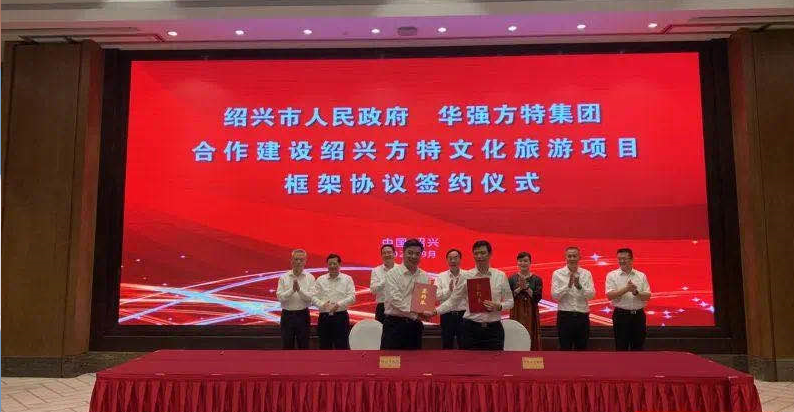 Yuecheng District Government signed the Investment and Cooperation Agreement on Shaoxing Boonie Bears Land and the Investment and Cooperation Agreement on Shaoxing Boonie Bears Wild Waters with Fantawild. These two new parks will be built around the East Lake Scenic Spot, with investments of 1.3 billion CNY and 500 million CNY respectively. The two parks will be themed around Fantawild’s famous animated IP Boonie Bears. Characters, scenes, and stories from the TV series and movies will be featured in the parks, which will also make full use of modern technology to provide engaging and interactive attractions. The two parks are expected to receive around 1.5 million visitors per year. The Keqiao District Government signed the Investment and Cooperation Agreement on Shaoxing Cultural Park with Fantawild. The new park will be built in the Lanting Tourist Resort, with an investment of 3.1 billion CNY. The park will have the overarching theme of Chinese culture, including classic literature, folklore and artwork. It will be a new type of edutainment park, uniquely presenting traditional Chinese culture using advanced technology. The park aims to receive 3 million visitors per year.

Fantawild is a leading player in China’s entertainment and tourism industry. The company has explored new development methods of scale production,diversification, and global expansion while cultivating its industrial chain which integrates innovation and creativity, research and development,construction, and marketing. Currently, Fantawild operates nearly 30 theme parks in more than 10 Chinese cities. In July this year, Themed Entertainment Association (TEA) and AECOM jointly published the Theme Index and Museum Index: The Global Attractions Attendance Report for the year 2019. According to the report, Fantawild parks rank among the world’s top five theme parks for four consecutive years with the number of visits reaching 50.393 million. Those parks generate huge economic and social benefits, propelling Fantawild to become a distinct brand and a trendsetter in China’s entertainment and tourism industry.