On December 8th, 2018, the incredible ceremony for the 17th China Huabiao Film Awards kicked off at the National Aquatics Center in Beijing. Fantawild’s “Boonie Bears” film, The Big Shrink, was nominated for the Excellent Feature Film Award. Fantawild also revealed the latest news about Boonie Bears: Blast into the Past, its newest film to be released during the Chinese Spring Festival in 2019.

China Huabiao Film Awards, also known as the Huabiao Awards, was officially founded in 1994 by the National Radio and Television Administration. The Huabiao Awards, the Golden Rooster Awards, and the Hundred Flowers Awards are the three most recognized honors in China’s film scene.

Boonie Bears: The Big Shrink, the fifth installment of the “Boonie Bears” franchise, uses a fantastic adventure to continue the brand’s message of environmental protection. The dynamic between Vick and his father provides the audience with an emotional connection to the characters as they embark on their tiny adventure. The film premiered on the first day of the 2018 Lunar New Year and stood out instantly in its success. The box office sales and audience reviews reflected the scale of the “Boonie Bears” sensation. It broke multiple box office records, and was the fastest Chinese animated film to break 100 million CNY at the box office. The film earned 605 million CNY (96 million USD) in box office revenue and set a benchmark for family animated films.

Since the launching of “Boonie Bears”, Fantawild has always been devoted to providing quality content and products for audiences. The “Boonie Bears” series have been broadcast on over 200 television stations nationally and have broken numerous ratings records. It is the highest ratings record holder on CCTV Children’s Channel and continuously beats its own records not long after setting them. It tops China’s major streaming websites with over 200 billion hits. Fantawild releases a quality feature film on an annual basis. So far, the five feature films of the “Boonie Bears” franchise have grossed an accumulated box office revenue of over 2 billion CNY (over 310 million USD). They also perform well in the international markets with excellent ratings and reviews.

At this year’s Huabiao ceremony, Briar, Bramble, and Vick made an appearance. This time they delighted audiences in hula skirts—one of their outfits from Boonie Bears: Blast into the Past. This is the newest “Boonie Bears” film that will hit cinemas on February 5, 2019, the first day of the upcoming Chinese Spring Festival. Packed with wild adventures, side-splitting humor, and fantastic places, this film will be a breathtaking ride into the past. 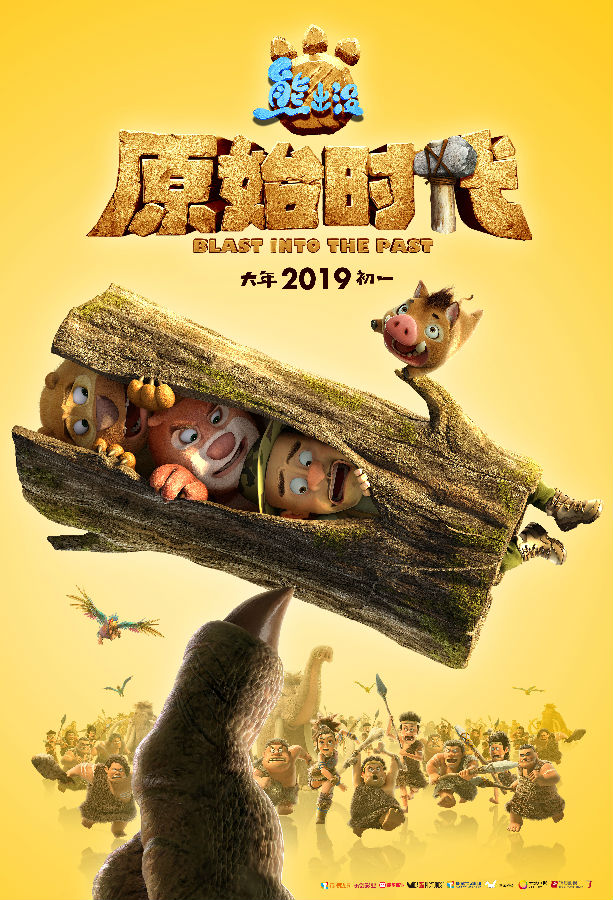 Boonie Bears: Blast into the Past follows the bears and Vick as they accidentally travel to prehistoric times. Faced with the challenge of getting home, the trio encounter the bizarre creatures of ancient times and traverse magnificent locations. The clash between the present and the past inevitably leads to exciting hijinks. Can the bears and Vick handle prehistoric society? Are the ancient humans friends or enemies? Will they be able to get back and celebrate Spring Festival? Come find out with a blast into the past!

In recent years, Fantawild has made significant progress in its global distribution, while thriving in the international market and promoting Chinese culture to the world. Currently “Boonie Bears” animated programs have been distributed to 82 countries and regions including the U.S., Italy, and Mexico. Some are aired on renowned global platforms like Disney, Sony, and Netflix. The “Boonie Bears” films have been released in theatres in over 30 countries in places like Russia, South Korea, Mexico, and Turkey. Even in these countries the box office performance stays consistently strong. Soon, Canadian audiences will also be able to enjoy the “Boonie Bears” with the release of some of the films in theatres.